The next steps in the kitbashing of the SPMW 847 wheel car is scratch building the bulkhead ends to match the photo.

I finished up the first round of modifications with a bit more Squadron White Putty on the remains of the stake pockets.

The Bulkheads appear to be about 30" high above the deck.  Naturally the bulkheads end at the end-stake-pockets.  The ends appear to be just inside the endposts, which would be using the end-stake-pockets.  The diagonal brace sheets extend inboard about 5'2" and are made from 0.010" sheet styrene.  The top edge reinforced with a strip of 0.01x0.03 styrene.  The end sheets are also 0.010" sheet, cut to a width of 1.165".  I made my vertical posts out of left over stakes from OwlMtModels' 3004/3005 lumber load kits.


I trimmed the plastic sheet parts out with a pair of scissors.  Unfortunately, I missed the need to overlap the diagonal braces past the end sheets to support the exterior end posts.

The photo of SPMW 847 shows that the bulkheads are just inside where the end-stake pockets are located, which makes since for them to anchor into the stake pockets.  I cut some spare stake posts from OwlMtModels 3004/3005 kits, which are good ABS plastic, and should weld to the ABS deck well.  I checked them for square as I glued them in place with a steel scale rule, letting them dry well before adding the 0.010" styrene end sheet.

The styrene end sheet  is centered up on the posts and glue is flowed along the bottom edge and up the joints with the stakes.

The first version of the diagonal braces were glued on.  Then it became apparent that there was not going to be an easy way to secure the exterior posts to it!  The first version was also a bit short of matching up to the remaining over-hanging deck section.


I decided to replace the diagonal braces with new ones that overlapped the end bulkhead sheet by about 0.050", to support the exterior posts.  I also remeasured the length of the overhanging deck and the space between the overhanging and the bulkhead.  Two pairs of new diagonal Braces were cut from the 0.010" styrene sheet.

The marks are made with a mechanical pencil, which works well for marking the sheet styrene.  The next several shots show the revised brace pattern. 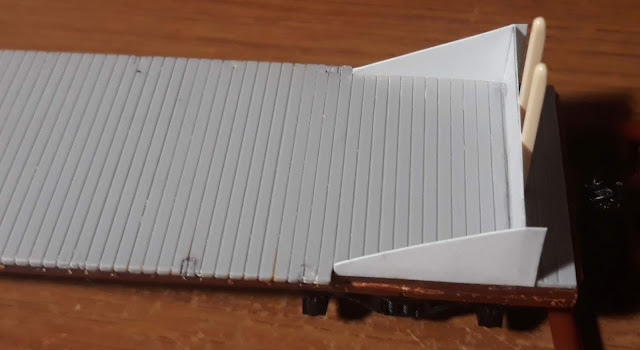 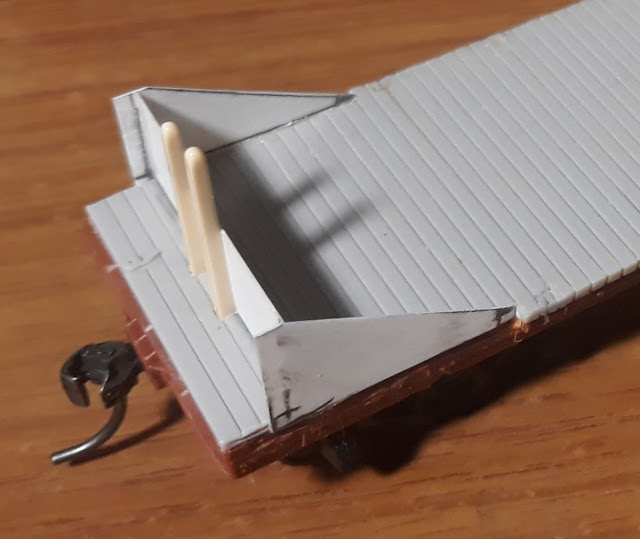 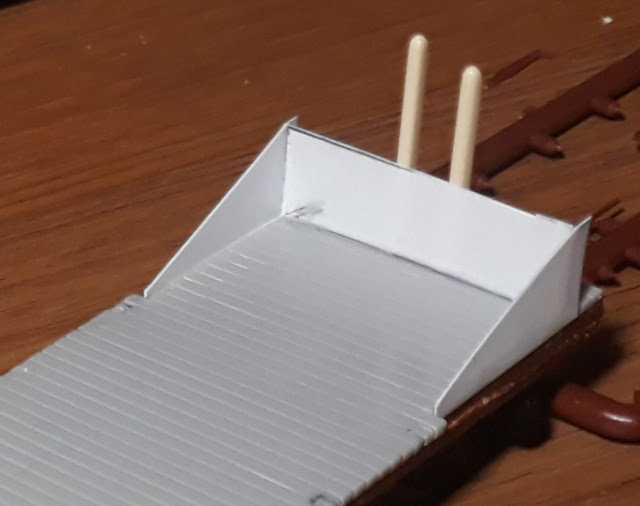 Additional stake posts from the OMM 3004/3005 kit are used as the exterior posts.


The last major addition to the Bulkheads is adding the small flange reinforcing strips of 0.010"x 0.030" styrene.  I also added the same strips down the inside of the braces to help glue it to the deck and up the inside corner with the end sheet to simulate the prototype sheets bent or angle bar in the joints.  I'm not sure from the prototype photo if there was a horizontal cap strip over the tops of the Bulkhead posts or not.  At this point, I left any more supports off, but it would make sense to have a good solid top bar for the top of the Bulkhead to keep any shifting wheelset from just punching through the steel end-sheet and then be stopped at the axle when it hit the vertical posts.

The wheels are from Tichy Train Group's 3004-3010 kit.  I desprued the parts with my P-B-L flush cutting sprue cutter, allowing minimal cleanup of the molding lines and gates.  I lightly cleaned the holes in the wheels with a drill bit to ream any flash out.  The axles are also lightly cleaned on the mating surfaces with the wheels.


Liquid Tamiya plastic glue was used to 'weld' the wheelsets together.  I first pre-wetted the mating surface of the axle, then pressed the wheel onto the axle, making sure the wetted plastic 'mushed' slightly as it slide into final gauge at the small flange-stop cast into the axle.

I checked the gauge of the wheels as I made them to be sure they would fit my inner-gauge rack.  After the first few, it becomes pretty repetitive and can be done fairly quickly.  I assembled 12 of the 33" wheelsets, enough for a full load on the flatcar deck.


Part way though the building of the Bulkheads I shifted and spent a few minutes laying out the Wheel Rack.

Lines are scribed lightly into the top of the deck, just inboard of the wheel gauge.  The Tichy axles work out to a back-to-back distance of 0.560".  The full deck width is 1.282".  Setting my calipers to a inset from the outer edge of the wide deck at 0.361" allows me to lightly mark the location.  The ends are scribed with an inset about 0.045" less, accounting for the narrowing of the deck at the end of the car.


I roughly mark the spacing of the inside of the wheel gauge with the pencil on the deck.  Inset for wheel blocks = 0.361"  I used this dimension to lightly scribe a line inboard of the overhanging deck.  I then adjusted for the narrower deck and lightly continued the scribe to the inside of the Bulkheads.

I used a couple strips of 0.060" x 0.125" strip styrene to mock-up the guide rails for the wheelsets.  These I feel are too wide, so I looked for some narrower stock for the final versions.


I built the first removable rack with 0.080"x 0.040" styrene strips, with 0.015"x 0.125" strips along the bottom, forming an L-cross-section towards the inside of the rack.  Looking closer at the photos I think there must be a thin sheet of steel under the wheelsets.  I built a second rack with the same parts, but the flange to the outside.


I wasn't planning to 'paint' this model before finishing, but the Bulkhead-Carside joints needed some sanding and filling, so it was easier to see with a couple coats of paint.

I used Squadron White Putty placed on to the model with a No.11 X-Acto blade.  Sanding was done with fine sanding sticks and in some of the tighter corners around the inner corners of the bulkhead braces with the plastic sanding 'needles' 320 grid by Alpha Abrasives.


I am trying to keep about 0.005" of sheet over the car sidesill to replicate the overlap on the prototype.  I may come back and add single rivet decals along the bottom edge of the overlap and two over the bolsters, above the two in the roping staple castings.


I'm not worrying too much about the deck weathering, etc on this car.  As it was converted into SPMW in 1951 and was certainly fitted with the wheel car setup by Nov 8, 1953, so the car should still be fairly clean, as in the photo.  Some of the SP's newly converted TOFC flats were fitted with new decks and seem to have been painted FCR too.  I wouldn't be surprised if the SPMW 847 had its deck painted as well when it was reapplied and modified for wheel car service.


At this point I stopped trying to putty and sand the joints.  The glossy surface of the FCR paint is making the joint 'appear' much more than it will after I apply a coat of Dullcote onto the body at this point after decalling should pretty well hide the joint.

Just before the last steps of painting, I noticed that the prototype car had vertical hand grabs on the exterior bulkhead posts, in addition to the regular F-50-9 grab irons.  I bent extra 'long' grab irons on the kit's jig and drilled holes in the top of the posts.  Then I drilled holes at the correct offset lower down the posts to mount the grabs.  The grabs were glued in place with ACC/CA glue.


A quick pass with the air brush with FCR across the ends and the bulkhead braces finished up the rest of the painting.  I used some small 3" reporting mark decals on the right side of each bulkhead.


The prototype photo shows the car with ten 36" wheels.  The Tichy wheelsets are 33" and I can fit twelve on the car.  I decided to build the racks as removable so I can swap the loads between the wheel sizes and empty options for the returning trips to Sacramento General Shops.


I'll probably do a small amount of light weathering on the deck, right around where the racks sit.  In the next part, the final steps are painting and securing the wheels to the rack.  I'll probably do 36" wheels by combining Kadee wheels with the Tichy axles once I get the 33" wheels finished up.

Posted by NightOwlModeler at 6:07 PM