I left off on the SP 5199 build (Part 1 linked here), with the underframe mostly complete and the trucks mounted.

At this point I move to working on the main one-piece resin body of the RPO.  I cut out the windows and then cleaned the edges of the doors and windows.

I also sat down with the photos of the 69-BP-30-3s that I am using for reference and marked the centerlines for the roof vents and drip rails over the doors.

I used some of the styrene strip provided in the kit to fashion the drip rails on the roof, above each door.  ACC glue was used to mount the drip rails. 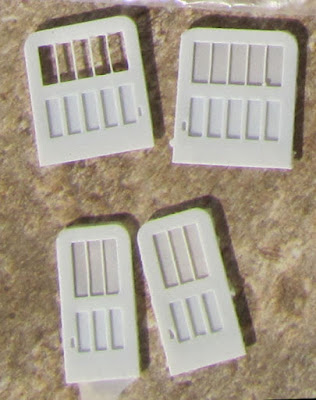 The flashing on the doors were cleaned up and the doors are installed.  Car must be taken as the thin flash extends over the window openings.   I use a fresh No.11 Xacto blade to remove the window flashing.  I then went back around each pane and carefully shaved down the battens until I couldn't see any more flashing around the edge.  Notice the door handles on the doors... this will show which door goes on which side of the car.

The working RPO cars were always fitted with the distinctive 'Mail Catchers Arms' used to snag mail pouches at speed when passing smaller towns along the route where the train did not stop.  I used a No.66 drill two holes 0.572" above the "floor" of the door opening and just outside the door post rivet lines.  The catcher arm kit I'm using on this model is CalScale 190-345 RPO Car Mail Pouch (pair).  There are 5 brass eye-bolts and two catcher arms in the kit.  I checked that the eye-bolts would easily fit the catcher arms and then used ACC to mount the eye-bolts.  After the eye-bolts are mounted, then slide the long "front" rod of the catcher in, then put the rear rod in the rear eye-bolt and slip the arm to the rear until it seats nicely in the eyebolt.  I have did not glue the arms at this time, and the fit was good and stiff, so the arm didn't flop around.


If you'd like to learn more about how the RPOs work, here's a link to my RPO page.

Well the main body's coming along nicely now.  I drilled out the grab iron holes with a No.76 drill.

I installed the windows next.  The SC&F cars have laser etched windows.  The masking is laser cut to provide masking by peeling off the mask from the window frames, but leaving the center window panes covered.

I test fit each window, but encountered the only real fit problems so far in the kit.  The windows are laser kit too large to fit in the recess in the back of the body sides.  I had to file about 0.020" from each side of the window.  Also I filed an angle on the windows.

Masking still in place and ready to paint.  I chose to not install the windows in the doors yet, as those do not need masking at this time and will be easily installed later when painting is complete.

I primed the body with SP Dark Olive Gree and the underframe with a light black mix.  I left the roof unpainted at that point as I need to do the roof vents still and stove jacks.

I marked the top edge line of where all the vents would need to line up.  Then drilled a No.50 hole for the vents to fit into.  The square vents I use on this car are recycled sqauare vents from other modernized Soho cars.  Details Associates vents could be used as well.

On further examining through the car photos and information of the 5197-5199-series cars.  The cars are fitted with upgraded baggage facilities, in comparing floor plans and other photos it seems that cars so upgraded had the right side forward baggage window plugged for the desk and stove to be installed.  There's some question as to when these cars were upgraded, but some pictures show cars in 1952 with upgraded facilities.

I removed the acrylic window where the plug will be inserted.  The new plug was rough cut 0.04" styrene sheet and then dressed down with a file to a friction fit into the opening.  As I'd already painted the body with the first priming coat, I did not want to have any fitting issues requiring filling and sanding.  The plug was glued from the inside with ACC.

I used a file and a No.11 blade to clean up the roughly shaped relief cut.  The filing along the top of the bellows is required because of the curvature of the car end, and the diaphragm needs a flat mounting.

The rest of the assembling of the diaphragms will come later after finish painting.

Back to the Underbody

The next steps will be back to the under frame.  I drilled holes in the frame to route the plumbing for the brake systems.  I should have done this before mounting the brake components.

The piping on the model was mostly just bending up some pieces of 0.018" wire and ACCing the parts into the holes.  I used a battery box off of a Soho 70ft Baggage car which was the right length for the RPO's box instead of the kit's resin box.

The stirup steps I'm using on this car are KitBits #87 "Baggage Car Steps" by Bethlehem Car Works which has 4x 12" corner steps and 4x 30" baggage/RPO steps.  Holes drilled with a #65 bit horizontal right above each vertical stirup leg into the side of the underframe casting.  I plan to solder on angle braces to stiffen the stirups.
I file notches in the bottom sill of the floor casting for the brass stirup etchings to fit through.  The etchings do protrude into the shelf which fits into the body.


To regain the proper fit with the body, and not forcing the sides outward, notches are filed into the back of the body where each leg is hitting the side.