Well, as alluded to in the previous posts, the supply train has arrived with the ME flex track and a couple of days ago the DTW switch parts!  Let's have a look at how the track gang's been doing laying the track.

Let's have a look at the supplies that arrived...
Many 6-packs of SG Code 55 flex track, one pack of Code 55 Rail, and one pack of NG flex track for what NG track will be modeled on the scenic section of NG right-of-way.

I decided to pick up two packs of spikes... I don't want to risk running out!  I did a rough calculations of how many rail joiners the track plan will be needing.  Four packs of Code 55 rail joiners and one pack of Code 40 joiners for use on the narrow gauge scenic section of the layout.

I have a mix of hand tools. Some of my tools: a small hammer, drill pin vise, tie connecting cutting flush-cutters (later I switched to just using the rail-cutters - the one shown here is strictly for plastic only!), a fiber-glass brush for cleaning the rail-ends, and a Kadee uncoupling magnet with a pile of ME track spikes stuck to it.
I was highlighting the centerlines of the track with the red Sharpie.

I decided to start with the track in the staging yard.

To make it easier to slip the rail joiners onto the ends of the rail, I did chamfer the base of the rail slightly with my Dremal cut-off wheel.
The ME flex track is somewhat different to work with than the "normal" Peco or Atlas flex tracks.  The ME is stiffer and the 6-section packages take some 'set' during shipment.  A gentle S-curve was formed into several pieces of the track.  These can be straightened out before mounting, but I found that I could easily straighten the track as it was spiked in place. 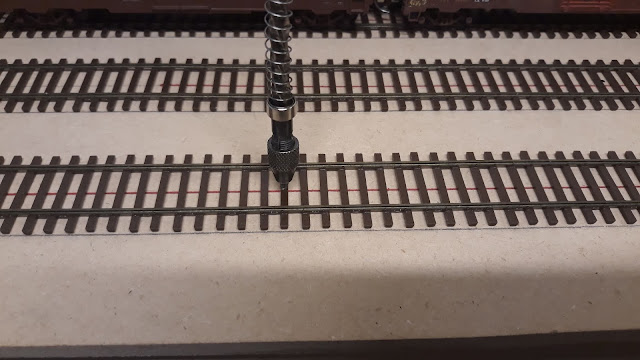 I pre-drilled all the holes cast into the ties through from the bottom.  Once the track is lined up with the centerline, I drill the same holes from the top into the top of the layout with a No.72 drill bit.

The spikes work well with the No.72 drills bits, providing just enough "bite" to hold well, but not so much that the spike wants to bend.  By the end of the staging trackage, I was getting pretty fast at laying each piece of flex track.
I started laying track with Track 5, the rear track, closest to the wall.  The first three tracks went down quickly over a few nights.
The two closest tracks to the center of the shop, aisle, will have switches, so I held off on laying them.  The east switch, shown above, will be layed once I have the next module built and matched up, as it will have the joint in the middle of the switch!

Wrapping Up the First Week of April 2021

Three 2-8-2, Mikes, sit at the east end of Mojave Staging on Tracks 3, 4, & 5.  I decided to "play" a bit, checking out track lengths pondering switching and use of the staging yard.  Yes, I've planned for this for 6 months.  But there's something fun to be said to putting some equipment out, checking clearances, finger space, etc.
The flex track for Track 1 and 2 in place with a Owenyo Local assembled on Track 3 with SP caboose 2.  Track 5 has an excursion consist put together.  Track 4 has some miscellaneous cars stored.  In the final operation, I figure Tracks 3 & 4 will be used to store and rotate freight cars through the Owenyo Local operations.  Possibly storing Beet Racks and Stock specials.  Track 5 will be for the occasional passenger excursion.  Interestingly Track 5 will be the longest track and is multiple cars longer than the longest consist of Excursion equipment I'll be needing, even with a pair of engines and even a water car.  I'll probably use the 'dead space' in the track to "deep store" more rarely used freight cars or possibly having some extra switching space on the 'top' of the track is always handy!

The western end of Tracks 1 & 2 will have a crossover. I settled on a right-hand crossover, to allow easy reach to the far west switch from the central space in the room.  I don't plan to use any powered switch machines, so all switches will need to be in 'reasonable' reach from the center standing space of the layout.  A switch is also located just east of this crossover heading out under the Owenyo mainline, which may eventually lead to a "Cassette" for turning steam engines on.
Track 2's stub is lengthened to a full piece of 36" flex track.  This is planned to be used as either a caboose track, mixed train RPO/coach storage, or other uses.

Next will come the switch parts, laying the switch ties, and rails.
Jason Hill