This page is dedicated to providing a modeling index of HO scale Pullman Sleepers that have been produced, and when possible, provide photographs of the completed or in process model.  This page is a compliment to my Modeling SP HW Passenger Car Index.

Books such as the Pullman Panorama series and the six volumes of Southern Pacific Historical & Technical Society's Passenger Car series are great reference materials to have on hand when researching anything Pullman or passenger car related.  Various other articles have been published which would be too numerous to re-list here. 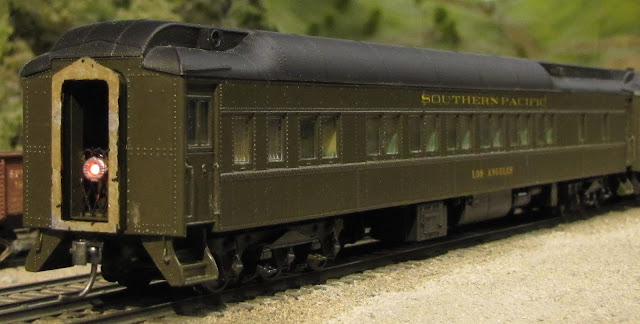 History of the Pullman Co. (Pool)

Pullman Standard was ordered on Dec 31, 1948 to sell all of its passenger cars to the railroads based on the cars the railroads were leasing in 1945.  Most of the railroads involved formed a new holding company (Pullman Co.) which would take over the massive number of cars they just acquired.  The railroads would then lease their sleeping cars back to the Pullman (Co.) Pool.

The traveling public on Jan 1, 1949 didn't see any change to the staffing or service on Pullman cars.  The Pullman Co. took over all the car servicing and maintaining facilities around the country from Pullman Standard.  Pullman Standard retained their production system to build new freight and passenger cars.

Over the next several years the railroads repainted some of their sleeping cars to show their names on the center letterboard of the cars.  Other railroads left the Pullman name centered, but put their own names at each end near the doors.  A few railroads never bothered to repaint their cars out of Pullman lettering and as they suspended passenger service in the 1950s.  Other cars that were never repainted were mostly relegated to the Pullman Pool service and many of those HW cars were assigned to Governmental Storage on Military bases until 1966 when the Pullman Pool was disbanded when the DoD and the movement of the US armed forces by air with the C-141 and C-5A transport aircraft, supplemented by commercial airlines.  Many HW Pullman Pool cars never turned a wheel after about 1956-1959 while in storage.  Many Pullman Pool cars were stricken from the Lease To Pullman lists in 1960 through about 1962 and scrapped.

Twelve sections and one drawing room sleeper, these cars by far were the most common HW Pullman sleeping car plan in use after about 1914 until the end of the use of HW Pullman Pool cars in the mid-1950s.  They had 12 Sections, which were the most basic sleeping accommodation and one deluxe Drawing Room for families or passengers desiring a full private suite with private toilet to stay in.

Pullman Co. (PC) Coronado was build between August and October 1926 for the Sunset Limited.  It was a car that was sold for scrap in August 1964, as one of the longest lasting Pool cars.  Therefore it likely never had its letterboard repainted, as it stayed owned by the Pullman Co. until the end.

Southern Pacific was the third largest owner of Pullman sleepers in the country behind PRR and NYC.  Here are two examples of these extremely common east coast cars.


When Walthers came out with their new 12-1s (Plan 3410), I had about 7 old Rivarossi 12-1s (Plan 2410) that were in desperate need of mechanical upgrade, mainly scrapping the Rivarossi trucks that were completely worn out.
When I did some extra research, I decided to rebuild them as 13-Section Tourist Cars for my military troop trains for the Korean War.  The prototypes were old 12-1s.  The conversions were as simple as locking the bathroom door in the Drawing Room and turning it into a section.  These ex-Drawing Rooms were enclosed and often given to the NCOs or officers in charge of the troops riding in that car, possibly even adjoining 14 and 16-section cars.

14-Section Pullmans were second to the lowest rated Pullman sleeping car.  Often used as Tourist Cars in later years.  Tourist Cars provided the budget fare traveler with sleeping berths, which were still better than riding coach for several nights in a row.

Soho and Other Brass Importers


The finished PC TC4206 Soho car will be the feature of a future blog post.

Pullman made a single-vestibule version of the 10-1-2 as well, which had more bathroom-lounge space at each end.  Bachmann and various brass importers have produced this version.

Pullman and RR owned 8-1-2s were common in the Pullman Co. pool and owned by the RR's after 1948 as well, so these cars certainly did show up around the country.

The 8-5s were rebuild from various other Pullman HW cars to fulfill the move towards more private room cars in the 1930s.  Notice also that the rebuild cars only have one vestibule.  This allowed Pullman Standard to get more bedrooms into cars of this plan.

NKP Car Co. has kits for modeling several classes of Pullmans used by the SP, including Pullman Std 8-5 sleepers. (Edit: Looks like the 8-5 "Clover" kit is not shown 8/2020, best to contact NKP Car Co and check availablity!)

The 6 Double Bedrooms & 3 Drawing Rooms Pullmans were the top of the line in HW sleeping car accommodations.  Featuring all private rooms, they lead the way into the private roomed cars of the Streamlined age.  Of course these cars couldn't carry nearly as many passengers as a 14 or 16-section sleeper, so the space in these cars was sold to the high-end passengers and transcontinental passengers, often riding on expense accounts for business.  Many were built for trains such as the Sunset Limited, Golden State Limited, and Overland Limited during the 1920s.  By the 1940s and 1950s these cars were still in use on HW second sections of premier trains and other chartered trips using Pullman Pool cars.

Only two cars in this group, which were regularly assigned to Nos. 57 & 58, Owl, for many years until retired.  It is interesting to note that the Mission Santa Ynez and Mission Dolores ran reversed in the Owl's consist behind the SP's full Lounge Car, so that the two lounge sections adjoined between the two cars.

The home railroad would prefer, if possible, to run their own diners and lounges because the money from the drinks in the lounges went to the company that owned the car, not which route it was on.  Pullman waiters served in Pullman Pool cars and home road employees served in home road Lounge cars, so it's not hard to see why the home road would push to get rid of Pullman Pool Sleeper-Lounges and Lounge-Observations because of this and run their own Lounge cars instead!

The unique feature of the Solarium-Lounge cars was their larger windows in the rear observation section of the lounge.  Basically these cars were enclosed observation cars.

These cars had the most basic sleeping accommodations of any Sleeper-Lounge.  For higher paying customers the railroads would have 4-Comp-Lounge-Obs or 3-2-Lounge-Observations assigned.

Pool assigned 10-Section-Obs would have been free ranging across the US on special trains and US Military movement (MAIN) trains through the Korean War.

These cars were reserved seating for day passengers.  They featured 28 parlor sofa chairs and 1 drawing room for day use.  Many day time trains on the NYC and PRR used 4-5 Parlor cars for their first class passengers.  In the west, Pullman Pool Parlor cars would be used on special trains requiring extra lounge space, which was sometimes in short supply.  These cars therefore would often be run near the Dining and Lounge cars for passengers to ride in during the daylight hours and let them get out of their private rooms.


Pullman retained a number of these cars in their 6100-series, some of which were painted in a dark purple color with Pullman on the letterboard and only a car number centered on the car side below the belt rail.


Walthers (New plastic)
The "La Mesa" Lounge-Club Car is one of the tongue-in-cheek cars that I did for the Golden Spike at the La Mesa Club in August 2015.  The back story for this car would have been that it was leased from Pullman and repainted to the "Overland" scheme and internally "temporarily" reconfigured to a Lounge Car, which would have been very easy to do simply by swapping out the Parlor seating with a few more tables, standees, and installing a bar in place of the single drawing room for serving drinks, etc.

The club also use a custom painted Pullman 28-1 Parlor car as lounge space in some of the extra passenger trains, so this model isn't too much of a stretch, especially being able to reuse the UP paint scheme.

This more or less all I have planned for this page.  I will upload new photos of models as I get them built or take other photos.

Please enjoy looking at the links below for more content.  Pages without active links are future pages I plan to add soon.