A Year of Modeling in Review

Greetings to all the people out there who have been checking into this blog over the last year!  The blog has been looked at about 23k times as of today.  (The actual number is a bit over 33k times, but I show about 10k of those being web-bot hits during about 2 months when I didn't post anything, and many sites were complaining of fake hit counts and YouTube problems as well.)

It's been a busy year in modeling and posting here on the blog.  Let's look at a few pictures from this year that were fun projects!  Links to the blog articles are provided below as well.


Posts about the La Mesa Model Railroad Club in San Diego, CA, have become one of the highest hit-count topics on the blog over the last year.  I hope to be making more posts about operations and TT/TO in the future.

One of the early topics I've come back to hit on is passenger train consist modeling.  The first blog post was on the Shasta, followed by one on the Owl, and then one on the Mail (Nos.55/56), the last one I've covered in detail is options for modeling some of the SD&AE's Passenger Trains.

I've covered a couple of topics of Modeling SP Light and Medium Steam Road Switchers.  It's been fun writing about the various models that are available to us today for building accurate models of SP's steam engines.

I've also revisited issues over my 10 Years Working on Intermountain AC-class Models, including repairing some damage to a 3rd run model.

I also wrote a blog about Swapping SP Tenders around between different models to get historical photo correct models.

The SP Caboose series of posts have been fun so far.  I plan to continue them soon once I get a few more suitable projects going and photographed.


I've noticed that I've done most of the modeling blogs this year on passenger equipment, consists, and multi-part blogs on certain cars as I've worked on them.

The other passenger modeling blogs and pages this year focused on affordable and kitbash-able models for various Southern Pacific passenger cars including;

There were also a collection of several reference pages cover other models and prototype information including one just on upgrades to the MTH Daylight cars.


I also started into some major projects cutting up MTH Daylight cars to make other versions of the cars and also installing a Track Ceaning "Slider" Pad to the bottom of the kitchen unit.


For modelers needing the earlier 1937 car and who don't have a Soho 77-CB-1 around to start with, this is about the only other option.


In this project I'm backdating the kitchen unit of the SP 10251 to the pre-1952 look with only one loading door.

In the same post I also discuss reconfiguring the Diner to be a Diner-Lounge during the "off season" of the San Joaquin Daylight.

Something for the Santa Fe Modelers!


A Trip Over Tehachapi on Santa Fe SCX-BI

While I've not made as many posts for the Santa Fe modelers out there, In February 2017, I posted a blog recalling a trip on a Santa Fe freight over the La Mesa Club's Tehachapi Pass during Timetable Train Order Operations.

I have also quickly hit on easy Modeling of Santa Fe Way Cars (Cabooses) of the 1940-1950s, which mostly covers Walthers 1300-class and Athearn models for the steel cupola way cars in the 1500-2100-classes.


One of the other fun projects coming up soon are these Soho brass cars which will be upgraded to be comparable to the MTH models above.

The model of the SP 10400 will be needed for Modeling the SP's Starlight during the 1949-1953 era.  As I get a few more of the signature cars for the Starlight done, I'll make a post about that (linked above).  Also the 1950-1953 Owl (Part 2) post has been sitting for some time waiting for me to get some pictures and write up the consist lists, that post should be coming soon as well. 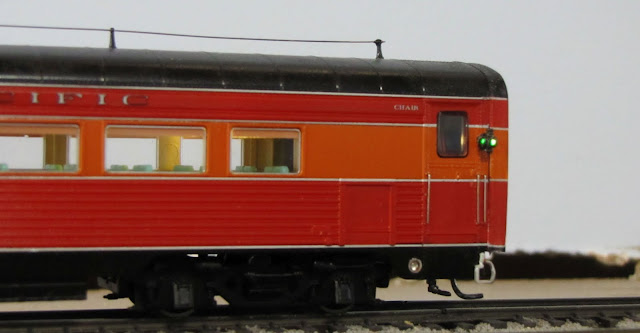 I look forward to another year of fun modeling projects and writing interesting blog posts for all the modelers out there.  I'm planning to start including more freight car modeling on here soon, but first I need to get all the varnish off my work bench!

Hopefully these posts will continue to be encouraging and educational to everyone.